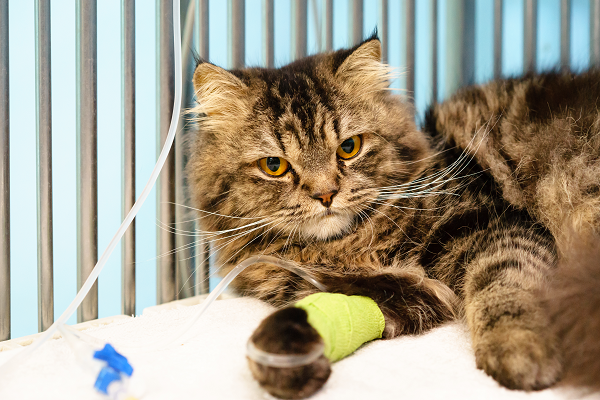 The liver produces bile, which is required to digest food efficiently. Bile is stored in the gall bladder and passes through the bile ducts into the intestines, where it mixes with and digests food, especially fats. Illness occurs if bile production is reduced or bile cannot enter the digestive tract through the bile ducts due to obstruction or swelling. Cholangitis and cholangiohepatitis usually occur together as a complex or syndrome (CCHC or CCHS) and are much more common in cats than dogs.

Based on microscopic evaluation of the affected tissues (called histopathology), CCHS may be sub-classified as:

There are numerous causes and contributory factors involved with CCHS. CCHS often has a preceding or coexisting condition, such as inflammation of the bile ducts, gallstones, pancreatitis, inflammatory bowel disease (IBD), or chronic interstitial nephritis (a form of kidney disease).

"CCHS often has a preceding or coexisting condition such as inflammation of the bile ducts, gallstones, pancreatitis, inflammatory bowel disease, or chronic interstitial nephritis."

Many cases of CCHS are suppurative, caused by a bacterial infection of the gall bladder with subsequent obstruction of the bile duct from mineralized deposits or swelling. Nonsuppurative CCHS may be caused by immune-mediated disease—a condition where the body attacks itself; in this case, the tissues of the gall bladder or bile ducts are attacked, the proliferation of tissues that partially or entirely block the bile ducts, or tumors.

Your veterinarian will discuss the specifics of your cat's condition based on diagnostic testing results.

What are the clinical signs of cholangitis?

The clinical signs associated with CCHS depend on the type of CCHS present.

In suppurative CCHS, the clinical signs are more severe and sudden. Cats with suppurative CCHS often have painful abdomens, a high fever, anorexia (lack of appetite), collapse, and vomiting. Cats may be jaundiced (yellowish discoloration of the skin, eyes, gums, and mucous membranes).

Nonsuppurative CCHS cases have more ambiguous, chronic symptoms and are challenging to diagnose. These cats often experience periods of vague clinical illness, such as lethargy, vomiting, anorexia, and weight loss. Most cases of nonsuppurative CCHS will be normal on physical examination. If the bile ducts become small because of CCHS, your cat may have an increased appetite since he cannot digest foods properly.

How is CCHS diagnosed?

It is essential to rule out other diseases that may be contributing to the clinical signs or causing CCHS. A thorough medical history and physical examination are the first steps in diagnosing CCHS. If CCHS is suspected, blood and urine tests are performed. Thyroid hormone levels (thyroxin) are typically measured to rule out hyperthyroidism as a cause of elevated liver enzymes. Pancreatic function tests (trypsin-like immunoreactivity or TLI test), cobalamin (B12), and folate levels are often evaluated to search for underlying sub-clinical pancreatitis that may be causing CCHS. Abdominal radiographs are often performed but may appear normal in some cats with CCHS. 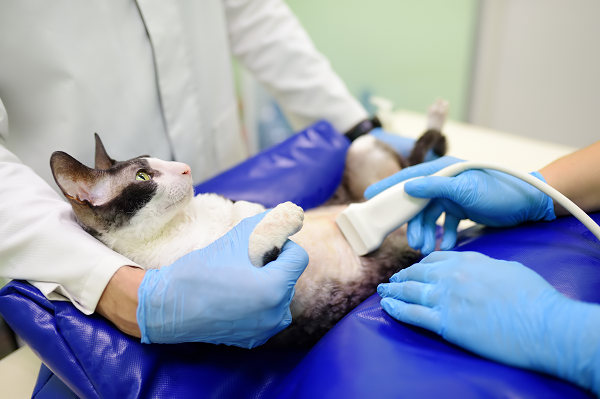 Abdominal ultrasound is considered the best way to diagnose CCHS. An ultrasound-guided fine needle aspiration (FNA) of the gall bladder or an ultrasound-guided biopsy may be done to evaluate the bile or look for abnormal cells or evidence of infection.

"Abdominal ultrasound is considered the best way to diagnose CCHS."

Another diagnostic test that may be recommended is a laparotomy or exploratory surgery; surgery is beneficial when bile duct obstruction is suspected.

What is the treatment of CCHS?

Treatment depends on your cat's clinical signs and the underlying cause. The initial treatment involves stabilizing your cat and providing supportive care, such as intravenous fluids, feeding through a feeding tube (see handouts "Tube Feeding in Cats" and "Liver Disease - Fatty Liver Syndrome in Cats"), and antibiotics. Typical treatments often include antibiotics, corticosteroids, and ursodiol, a drug used to improve bile flow. Surgery may be required if there is a bile duct obstruction. Additional drugs and therapies, including hospitalization for intravenous fluids, may be recommended based on your cat's specific condition.

What is the prognosis for a cat diagnosed with CCHS?

With a timely diagnosis, appropriate treatment, and supportive care, the prognosis for suppurative CCHs is good with timely diagnosis and appropriate treatment; in some cases, the condition may be cured. With nonsuppurative CCHS, chronic, long-term remission is the therapeutic goal, and the prognosis depends on the severity and underlying cause or causes.

© Copyright 2022 LifeLearn Inc. Used and/or modified with permission under license.

View All
IS YOUR PET UNWELL? TRY OUT OUR PET HEALTH CHECKER Learn More